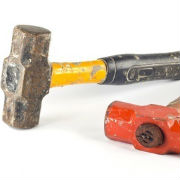 Many manufacturers of abrasive materials fight a losing battle in their conveying systems. The root cause of constant pipeline problems along the entire manufacturing process is the abrasive material being conveyed, wearing through conventional sweep elbows at an alarming rate.

Chromalloy’s Drilling Division was experiencing problems every 90 days. The companys Houston plant produces ground barite (barium sulfate), an abrasive compound used in commercial drilling operations. The high-density material was wearing through 4- and 5-inch pipe elbows in the pneumatic system that transported the finished material from the grinding mills to storage tanks.

Engineers tried several rather ingenious approaches to extend elbow life, even putting larger elbows over those in operation and filling the void with concrete. Despite these creative approaches, there was no appreciable difference in elbow life.

Like clockwork, the pipe elbows wore through every 90 days. Replacing the elbows was a costly, time-consuming task, and frequent line shutdowns required during the maintenance had an expensive impact on productivity.

To add insult to injury, the conveyed barite frequently plugged the lines when they rounded bends. This loss in velocity caused barite to collect at the downstream side of the elbows, causing obstructions so dense only brute strength could dislodge them.

A sledgehammer was used to break up the obstruction, followed by a shot of high-pressure air to purge the line. It was obvious that the design of traditional sweep elbows was responsible for the conveying system failures.

Chromalloy replaced every conventional elbow with 4- and 5-inch cast-iron Smart Elbow models. Since the replacement, there has not been a single case of pipe plugging. In fact, no maintenance of any kind has been needed.