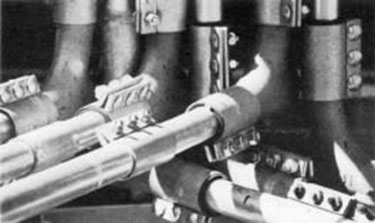 Even the most seemingly innocuous materials can be become destructively abrasive when moved pneumatically — maintenance manager Al Husni of ACRO Extrusion Corporation saw it firsthand. A Wilmington-based company, ACRO produces vinyl window systems and extrusion. PVC resin, a key component in vinyl formulations, was moved pneumatically at such a high rate (34,000 pounds per day), traditional sweep elbows were wearing through as often as every 14-21 days.

These line failures were costly. Repairs and cleanups consumed valuable man-hours, and any leaked material potentially subjected the company to EPA fines.

Various vinyl formulations require precise ratios of various additives, each with their own densities and characteristics. Differences in densities means these additives, when conveyed pneumatically, have different flow rates. These differences in flow rate commonly resulted in plugging and surging issues in the conveying lines. Even worse, elbow failure risked introducing moisture into the mixture, potentially rendering an entire batch of product unusable.

When Husni discovered an ad for Hammertek’s Smart Elbow deflection elbow at a trade show, he took a chance. Ten Smart Elbow products were installed as part of a 60-day trial offer.

The results were astounding.

All 10 Smart Elbow deflection elbows remain in operation more than 16 months after initial installation, withstanding brutal manufacturing and production conditions that rendered conventional sweep elbows useless after just three weeks. Husni was so impressed by the performance, ease of installation and compact design of the Smart Elbow products, he ordered an additional dozen eight months later.

The secret to the Smart Elbow deflection elbow is its patented Vortex Chamber, a nearly spherical chamber located at the back of the bend where traditional elbows fail. The chamber’s patented shape allows the formation of a slowly rotating ball of material which, instead of creating eddies or other pockets of turbulence, redirects and smooths the flow of material into its new direction.