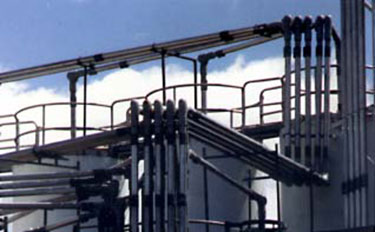 RheTech, Inc. was all too familiar with worn out elbows in their plant.

When Gary Wright, Director of Plant Engineering, had one of the HammerTek® Smart Elbow® deflection elbows they had installed a year earlier pulled to check for wear and tear, he assumed it would require considerable repair, if not replacement. “After one year in service, we could still see the casting marks,” said Wright. “By now, we would have been through four or five sweep elbows and 12 rolls of duct tape.” He added, “We’re impressed.”

Five years later, we checked back with RheTech to see how the Smart Elbow units were holding up. None of the 170 Smart Elbow deflection elbows installed had worn out or been replaced since the installation six years earlier. Click here to read the full case study.

RheTech, Inc., located in Whitmore Lake, Michigan, manufactures proprietary thermoplastic polyolefin alloys and compounds in the form of plastic pellets, frequently using additives such as minerals and fiberglass. The highly abrasive additives, especially the fiberglass, were taking a toll on the plant’s long-radius sweep elbows.

In the main transport lines of the finished materials side of the process where they convey 30% glass-filled poly pellets, RheTech’s sweep elbows had been wearing out about every 90 days. Each time a sweep needed to be fixed or replaced, it required costly downtime which was also having a negative impact on RheTech’s service to their customers. In addition, RheTech’s exterior silos are loaded 24 hours a day. When an elbow failed during the night, it often went initially undetected.

The failure would cause a major product spill requiring hours of clean up to get the material back into storage and the plant operational. Finally, RheTech was forced to shut down the line and install new sweep elbows, costing them a substantial amount of money in parts, labor, and downtime. Wright knew they needed to make a change.

After years of maintaining sweep elbows, Wright got an opportunity to replace them with HammerTek Smart Elbow deflection elbows. In all, 120 tube-size 90° elbows were installed: 70 of regular ductile iron and 50 made from hard ductile iron. Wright was thrilled with their performance. Fifty more elbows were installed four months later. Furthermore, when RheTech designed their new plant in Fowlerville, Michigan, they specified 65 Smart Elbow models from the start. Since the new plant was equipped with them, RheTech’s plant engineers never had to wrestle with elbow failures, delivering a substantial cost savings.

To find out how the HammerTek® Smart Elbow® deflection elbows can save your company expensive repairs and downtime, visit us at HammerTek.com.