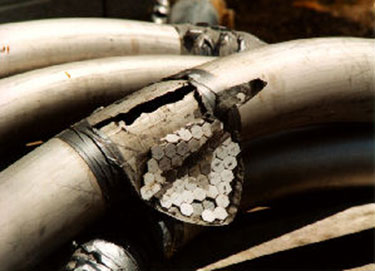 Five years after we did a case study on the 120 HammerTek® Smart Elbow® deflection elbows installed at RheTech, Inc., we checked in with them to find out how the elbows were holding up. RheTech is a designer, manufacturer and marketer of proprietary thermoplastic polyolefin alloys and compounds sold to the transportation and consumer durable goods markets. RheTech uses additives containing highly abrasive minerals and fiber reinforcements in their products. Gary Wright, Director of Plant Engineering, told us that after almost six years of operation, no elbows have worn out or been replaced. For the full case study, click here.
Typically, the Whitmore Lake, Michigan plant would have repaired or replaced four to five of their original sweep elbows in a year. About a year after installation, engineers pulled one of the Smart Elbow deflection elbows. Despite its location in their most demanding application, they could still see the casting marks.

After the initial installation, RheTech installed 50 more Smart Elbow units, as well as 65 Smart Elbow models in a new plant in Fowlerville. According to Wright, even though the Smart Elbow products cost more than their original long-radius sweep elbow, the HammerTek elbows paid for themselves in less than a year. Additionally, the Smart Elbow deflection elbows saved them significant money by reducing downtime due to maintenance, repair, replacement, and cleanup.