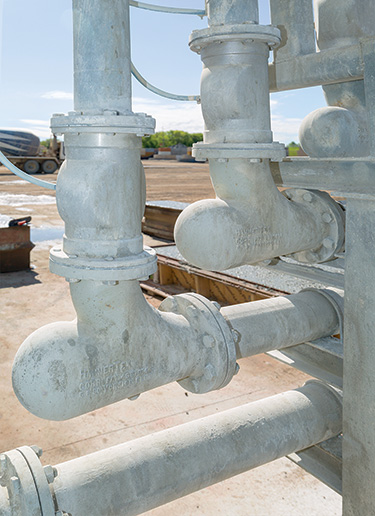 Robert Ober & Associates is a specialty design/build firm that serves an international client base for bulk material handling projects that range from $25,000 retrofit contracts to $25-million turnkey plant projects. The company’s early focus on pneumatic material handling for concrete plants has grown to include a wide range of material handling, weigh batching, and powder blending systems in mining, grain, fertilizer, food, fly ash, plastics, pharmaceuticals and other industries. About 60% of that focus is on new plant designs and 40% on plant retrofits.

15 years of use without a documented failure

Since initially specifying the Smart Elbow® deflection elbow (also called a “vortex chamber elbow” or “non-impact elbow”) for wear resistance in concrete plant designs, company founder Bob Ober and his associates have expanded the elbow’s use to conveying of materials from fine, soft powders to larger, more abrasive particles such as silica sand in size ranges from 200 mesh (74 µ) to 20 mesh (840 µ).

“I do not know of a single vortex-chamber elbow being taken out of service, among all that we have put in service over these past 15 years,” Ober says. “They have become an integral part of the fabric of our design any time we are dealing with dilute-phase material transport.” In fact, he says his company specifies the elbows as an alternative whenever a client’s design calls for long-sweep elbows. The policy evolved after receiving ongoing client complaints about prior uses of long-sweep elbows requiring excessive maintenance downtime for patching or replacing worn-through ells, or clogging of hygroscopic materials.

Ober’s company has evolved its own installation procedures based on the historic longevity of the deflection elbow’s wear resistance in its clients’ plant applications. “We will frequently hot-dip the flanged piping and paint the elbows with a zinc-metal cold galvanizing compound, because once they go up they’re going to stay there for more than a decade,” Ober explains.

Learn how we solved this problem for Robert Ober & Associates by reading the full case study here.